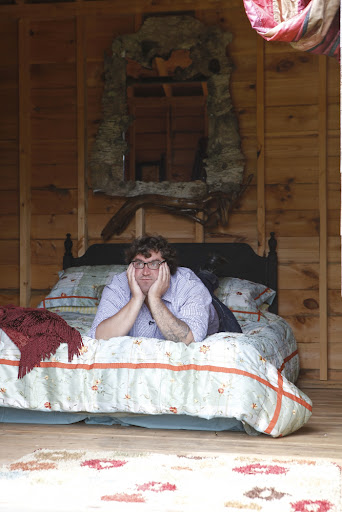 From his popular blog Food Coma to his editorship position at Maine Magazine’s Eat Maine, Joe Ricchio is a well known fixture in the Maine food scene. He recently started writing for Bon Appetit, and so, at long last, the influence of his already popular commentary on the national food scene is steadily growing.

Along with Kurt Graser, Ricchio and I worked together to create Food Coma TV, a web series of short movies about Maine’s food scene outside of Portland. Where Food Coma TV was based on highlighting the towns visited as much as the food consumed, his new show, The Food Coma Show, dives in to one restaurant (in the case of the first episode, Bresca) and examines the food and experience offered there. It premiers this Sunday at SPACE Gallery.

Ricchio’s annual review of pumpkin beers, which he openly hates, came out last week as well. We discussed what is to be expected at his event, of the show, and the implications of being a pumpkin beer drinker.

Please be warned: Ricchio has a big, sometimes crass, personality, and so if you find yourself offended by blue language, I highly suggest going elsewhere.

What is to be expected from the episode release party?

Joel and I are making some snacks, there will be lots of drinking, and we will show our episode. There will also be two art installations there so people can look at some stuff other than some bulls**t that I do.

What can people expect from the episode?

The episode is the pilot of The Food Coma Show. It focuses on a meal at Bresca and it looks great. It’s about 24 minutes long and the guests are Olympic skier Julie Parisien, Spose, Joel Beauchamp, [Ricchio’s roommate] Jon Dietz and myself and basically you watch me have dinner. That may be good, or you may hate me afterward. It is kind of an experiment under the Food Coma umbrella. You might hate it and think “This is the most self-indulgent piece of s**t I have ever seen,” but you never know.

In a way, it is like the other side of Food Coma TV, where we went to like, 6 places and had to put all of that into a 13-minute episode. For this, I wanted to go in the other direction and spend the whole episode focusing on what the full experience of eating in one place would be like and include all of the dialogue that takes place. At some point it becomes apparent that I don’t know who Keith Haring is, and Julie tells a story about getting her teeth smashed out at the Olympics. There is a lot of food and wine talk. It’s a 3 and a half hour experience turned into 24 minutes.

You just released the PumCaCa piece. What were some highlights of doing that?

The highlight of it was taking two people who were self-purported pumpkin beer lovers and hearing them say, “No, we no longer like these. They’re disgusting.” Because they are. It actually blows my mind that people would ever sell this stuff. The body naturally rejects them, and the feeling when it enters your mouth is that it needs to be gotten out right now. It’s disgusting and not meant for consumption.

The flavors in most of the beer seem totally unnatural. I think one flavor was Dentyne gum, or that bubblegum flavored fluoride they gave to you when you were a kid. Those were common flavor profiles.

If you’re talking with someone you haven’t met before, and you both are getting along, but then they tell you, “Oh, I am a huge fan of pumpkin beers,” where does your mind go?

Even if you’re a really pretty girl, I want to sleep with you less. If you are a grown man… It’s something I could probably accept about you, but I would be wary.

The premiere of The Food Coma Show is taking place on Sunday, November 4th at SPACE Gallery from 6:30 to 9:30.