Last month, The National Civic Day of Hacking took place over the course of a weekend. The day induced events here in Portland where a group of “civic hackers” addressed a civic challenge by employing innovative uses of technology. The Portland event was organized by Sam Mateosian and Sam Frankel, and they took on the issue of cigarette butt litter in Portland. The Press Herald ran a nice write-up of their efforts, which you should check out.

I recently talked with Sam Mateosian, who, when he is not organizing Hack Day events, Director of interactive media for Big Room Studios. We discussed the origins of Portland’s participation in the national event, and the surprisingly controversial etymology of the word “hacking” (about which there is actually a Wikipedia entry).

How did you get interested and involved in organizing the event?

Two things happened at the same time. First, I was freed up a bit from my day job specifically to do a little bit of community building. We just felt like we had been living in a cave or under a rock for ten years and not being a part of the community here. Our office is in Portland, almost downtown, and prior to that we were working out of the State Theater building. The way that I describe it is that I was chained to my desk and pounding out code and pretty pictures for business clients, which is not a bad thing but it was like what they describe now as the export economy. A lot of that work is going out of state, so I was not necessarily spending time talking to people working here. So we made this conscious effort to get out and about a little bit.

We got bigger and some of the guys who work here said, “We’ve got side projects that we’re working on and we would like to stay here and get together once a week and work on those side projects. I said, “Yeah, that’s super cool. Let’s do that. Let’s open it up to the community and see who else wants to come, hang out and have them hang, and work on stuff.” The first meet-up was me, the other guys and one guy who randomly showed up. The second was similarly sized. It has grown a little bit where it would be three, four, five people, but now it is a regular crew of 10, 15, and sometimes 20 people who show up and work on their projects.

The stuff is random. One guy is making a real-time bee-hive monitoring system so it monitors the weight of the hive over time and reports that to a web page somewhere so you can tell when it is full.

When you talk about hacking, can you explain that a bit? It seems to be a definition that changes depending on the context or era.

Yeah, it is contentious. Most people make the association with people who break into computer systems and steal data, credit card information, and bad stuff like that. There is a broader definition. The one that I like is way broader and it goes beyond working with software, and it is somebody who uses creativity and willingness to make due with the stuff at hand, limited resources or whatever. I think the best example is MacGyver. 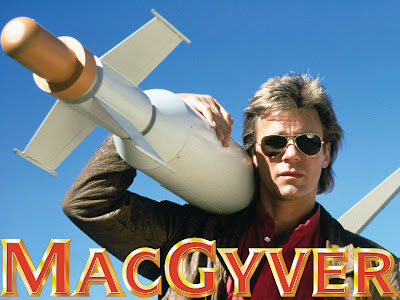 That’s my favorite definition. The other definition that I like is basically anybody from rural Maine.

I think it is one of those terms that is really, really malleable. In the office we throw it around a lot. For example, “I just put together a really hacky solution to that problem” means that it was quick and dirty and got the job done using what I knew how to do, what I knew would work, and it is not necessarily the most elegant solution, though it can be really simple and elegant.

So is it Jerry-rigging?

Is it it Jerry-rigging with flair?

Yes, Jerry-rigging with flair. You know, with creativity. It’s one of those things that is more an attitude. Basically, all of the Israelis I know have that attitude. You know, I want to get a taco but the line is too long, so you find the third guy in line and tell them that you will buy them a taco if they get you one. That’s hacking the line, you know?

The story I have been telling, and I honestly haven’t done the research to find out if this is really true but I like the story… On the National Day of Civic Hacking mailing list, this topic kept going around. People would say that such and such a bank wouldn’t sponsor us because of the word hack and that we should rebrand. Other people were like eff that. That’s lame. Live with it. And people offered their own definitions. One person said that his story was about his grandfather, who was a World War II plane mechanic in the South Pacific and when the wounded planes would come in and they needed to get other planes out, they would hack pieces off one plane and get the other planes up and running with hack saws and that was called The Hacker Duty or whatever. He remembers hearing that story and obviously the term has to come from somewhere. [Note: There is a blog entry about this here.] Where did the computer people pick it up from? I don’t know where that came from. I don’t know how it was adopted as a term for breaking into security systems or software or whatever.

So how did Portland’s first Civic Hack Day pick up the steam that it did?

Well, I think that to start we had a really great product, The Buttler, come out of the event. But going back, the city got pretty engaged, and that is because Sam [Frankel] is friends with [City Councilor] John Anton from having worked on his campaign. We went and hung out with him a little bit and he got it right away because he is a smart and clever guy. I think this warrants that, this idea like, “Let’s get it done.” I think that’s kind of why he is bowing out of the City Council, because he is looking for ways to get it done. So he brought us in with the city and Mayor Brennan was on board right away.

Mayor Brennan is sort of a gem, it seems, when it comes to embracing this sort of thing.

Totally. Having that conversation and the stuff that followed from that made me really thankful for the initiative to create the position of an elected Mayor worked out. Here is the mayor that we got, and isn’t that super cool? At the same time, Sam and I felt like we were in a living episode of Portlandia. So the city got engaged, and some other community organizer types like Liz Trice got engaged and they were well connected enough to bring in lots of ideas. One woman was literally Googling “civic hacking in Portland” and this was the only link and she showed up. We had a couple of really fortunate connections where people who are moving back to the city would find us.

To learn more about civic hacking on the national scale, check out the Hack for Change site for more information. For Sam’s insights on how the Portland event went, including information what what, exactly, the group came up with, check out his blog entry about Portland Civic Hack Day here. I will be running a longer, unedited version of this interview in podcast form over at Knack Factory later this week.