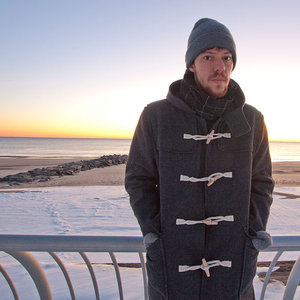 I met former Portland musician and Maine music scene cheerleader Bryan Bruchman to talk about Lady Lamb the Beekeeper: Return to Home, his new documentary about Pine Tree State indie darling Aly Spaltro at Piano’s in New York’s Lower East Side. He was throwing his Third Annual CMJ kickoff showcase which, as it has every year, featured a few connections to our state. This year said connections came in the form of Conjjjecture and The Box Tiger, two bands that boast Mainers as members.

I immediately fell for The Box Tiger’s music, and my 22-year-old inner scenester fell for their singer. They inspired in the heart playful enthusiasm by way of their eager catchiness, and singer Sonia Sturino assaults her guitar in a concentrated hunch / possessed gyration ala Freedom-era Neil Young. Be still my heart. I was sad to have to check out early for prior obligations.

Photo: The Box Tiger’s youngest fan watches as the band prepares to play.

Bruchman works in Brooklyn at BTRtv, the video arm of BreakThruRadio, where he serves as Communications Coordinator and Producer. He moved back to the city from Portland, where he had worked in no less than a dozen capacities enriching the local music scene from 2008 – 2011. He was in the band Marie Stella, maintained the music blog HillyTown, organized DIY shows throughout town, and booked bands for SPACE Gallery. Whenever Bryan told me that I had to be at a show, that it would change my life, I would always go, and he would always be right.

For those not in the know, Aly “Lady Lamb the Beekeeper” Spaltro is a Maine-rooted musician. While she had previously recorded a ton of music,  released Ripely Pine, her first studio album, earlier this year. Pretty much everyone ever loves her and she is presently touring the world.

Lady Lamb: Return To Maine is a short documentary / road film Bruchman made about Spaltro’s return to the state for her record release party earlier this year. It was produced in partnership with BTRtv. Below the embed, Bruchman talks about his time in Maine, how the project came about, and why similarities between him and Spaltro made him the perfect person for this project.

How did you decide to make Return to Maine?

While I was in Portland, working at SPACE Gallery, and overseeing Hillytown, my time there coincided with Lady Lamb’s rise to popularity locally and then nationally. I was back here and working video at Breakthru Radio. Ally was going up to Maine in March for her record release and she asked me if I knew of anyone up there who could shoot video of the show. I gave her a couple of names but told her I wished I could do it and so she asked me along. I had pitched it to Breakthru, and they said it was cool. I drove up with her, was present for a radio documentary, went with her to Brunswick and to the video store she worked at and it turned into a mini-tour documentary.

For me, there is this personal connection. She is someone I know and am friends with, and someone I could get close enough to to make a video good and not just a concert video. And she is at this point in her career where she is opening for huge artists nationally and internationally so she is interesting in that all of these people are starting to hear of her, though they don’t yet know a lot about her. It was cool to go back to town and explore this with her. It is not necessarily something that is wildly revealing, but it is something that both fans and future fans of hers will find compelling.

As I you mentioned earlier, it also lines up very neatly with your time in Portland and it serves as a bit of a homecoming for you as well. You and Aly are both in music in one way or another, and you both found a very particular sort of popularity and prominence in town on a very similar timeline.

That is not something we talked about in the development of the project, but it is something that we talked a lot about while shooting and working on it. So much of our experiences were overlapping. When I started working at SPACE Gallery, she had just started playing, and playing there. When I started HillyTown, she was one of the first people I was covering with any regularity. As that site and things I was doing were getting bigger, her career was expanding into what it is now. There was a lot that was unintentionally aligned in that way. We both happened to move to New York from Portland at similar times too, and that kind of connection made it sort of unique, and made the project something someone else could not have done in the same way. It was especially unique in that her release show was at SPACE Gallery, and she talks about SPACE in the video and how instrumental it has been to her. I have many of the same sentimental feelings about that place.

Can I also point out that while we are talking, there is someone removing a Banksy installation that went up last week and there are a bunch of Hipsters out here taking a pictures. They took away the car that was spray-painted and now they’re taking away the truck.

Are you satisfied with how the project turned out?

I am. It is the first time I produced something of this length. I learned a lot. The video I typically work on is somewhat formulaic, and so an open-ended project is something I was really excited to take on. It was basically three days worth of shooting and doing audio, and then I came back home with this giant amount of footage, which was a little daunting. I was looking to take on a project of that size, though, and it felt like, “Of course this is the project I will make that transition with.”