I will not be endorsing any candidates this year. All of my heroes have been known to support issues, not candidates. Truth be told, I have found that most politicians, regardless of party, get the issues that I hold dear wrong. As such I don’t feel at home cozying up to any of them.

This said, I recently expressed a fondness for U.S. Senate candidate Shenna Bellows. While I am often pegged as a progressive, liberal, and all around leftist (I prefer the latter), I—as many Millennials do—have the DNA of a civil libertarian. In an age when governments and corporations have both totally lost their minds on issues relating to civil liberties, I believe that a former head of our state chapter of the ACLU has some important perspectives to offer. I also like that when she doesn’t get endorsements that she is more deserving of than Sen. Collins, she acknowledges this and makes statements about her record and strengths with assertiveness and grace. Certain gubernatorial candidates could learn from her.

When I expressed my fondness for Bellows on Facebook, I was surprised when Geoffrey Ives, a 50-something, left-leaning friend who works at a local software company, suggested in response that he would be voting for Collins because of her record as a rather diplomatic, even-handed Senator. Along with a handful of friends, I suggested to Geoff that he reconsider his view and to give Bellows another shot. I don’t know if he has done that yet, but after the recent Supreme Court Hobby Lobby decision he relented on his steadfast support for Sen. Collins based on her party affiliation and directed the following open letter toward her. 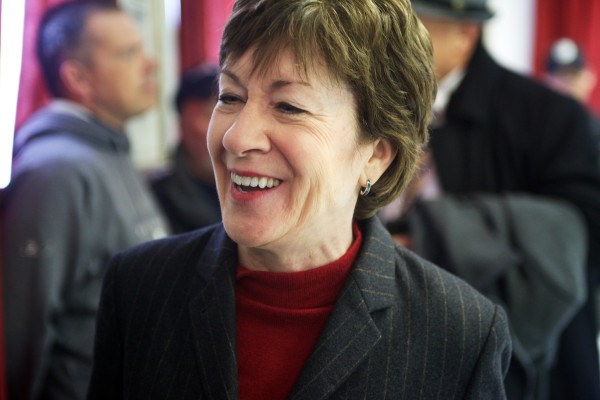 I spent some time last week on Facebook publicly justifying to a group of politically minded millennials my decision to support you in your senate bid.  It was a heated discussion that I took quite seriously. After the SCOTUS ruling I doubt that I can continue to support you.

I based my support for you on your willingness to compromise and that you have a record of being good for Maine in the spirit of Snowe, Cohen, Muskie, and Margaret Chase Smith. I believe we need compromise above all else in Washington DC today. Still, your party’s actions and your party’s Supreme Court Justices’ decisions in general make my support of your campaign much more difficult.

The fact that SCOTUS justices (white male justices your party appointed) have repeatedly ruled on behalf of corporations at the expense of citizens is unconscionable. Their most recent ruling says in effect that as an adult male I can get Viagra insurance coverage but my two daughters are not allowed contraception under the same insurance plan. How does this make any sense? Is it simply that men are encouraged and allowed to have sex in whatever manner they desire and while women are expected to refrain from sex?  Is this our national position on sex? Is this a religious view?

Your party’s values are stuck in the past. GOP votes, comments and rulings surrounding women’s issues are nothing less than barbaric. The outrage I’ve read and heard among women my age and younger is staggering. Your party’s positions on these issues and others continue to be rooted in a white-male dominated mentality. The world has changed. The GOP’s continuance along these tired old paths not only makes you look wrong, but it makes your party look stupid.

How can I vote for a Republican when a GOP majority in the Senate could mean more restrictive laws for women – for my daughters?

How am I to vote for a Republican when we both know there will be a move to impeach the president I voted for twice? Your colleagues publicly swore to obstruct the candidate I legitimately elected.

How can I to vote for a Republican when the party represents misogyny, bigotry, climate change denial, war mongering, voter suppression, environmental destruction, and outrageous tax breaks for the wealthy at the expense of the poor and unemployed?

These things are making me rethink my position on your campaign, Senator. Because I am not stupid.