“Sometimes I wonder whether the world is being run by smart people who are putting us on, or by imbeciles who really mean it.”

You know, sometimes you produce a short documentary about an gubernatorial candidate that—unbeknownst to you—contains a song lyric that alludes to another elected official giving head. Then the GOP uses this small error in translation as an opportunity to issue a profoundly dishonest press release and you spend 24 hours fielding calls from local and national press. And then the chairman of the GOP is forced to acknowledge that his overzealous attack dogs acted dishonestly. And then Bill Nemitz offers this nugget of gold:

Wrote Steed, “[Maine GOP Communications Director Sorensen’s] press release suggested this was done intentionally, that the video was a collaboration with Michaud, and that the message essentially comes from Michaud himself. None of this is true. Had they reached out to me before releasing it, their press release would not be so littered with errors.”

Poor guy. Steed is apparently under the impression that Sorensen and the Republicans actually care about getting their facts right, which they so clearly don’t. Rather, their modus operandi is to 1) manufacture mud, 2) sling it and 3) if it doesn’t sufficiently stick to their target, sling it again.

Either way, it’s high time that Maine’s Republican Party drag itself out of the gutter, apologize to Mainers everywhere and, last but by no means least, show Sorensen the door.

In civil society, we call that putting out the trash.

While my apology to Sen. Collins stands, and while I regret that this all went down the way it did, even though it was really funny to hear Tom Porter and A.J. Higgins break down the meaning of “giving brain” on MPBN, the real star of this story is the seemingly off-the-rails behavior of the Maine Republican Party. The offending lyric derived from King of Maine, a song by Maine rapper Spose. I overlooked the meaning because, well, I am not as hip to sex slang as I was when I wasn’t a married father. The reference is one that former Collins staffer and current head of the conservative MHPC Matt Gagnon gave a positive nod to back in March of this year, and one that Maine Republicans Executive Director Jason Savage joked about on Twitter in the context of an elected Democrat on Thursday afternoon. Presumably they didn’t know about its meaning either. 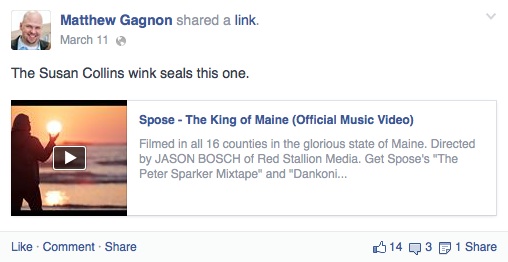 But according to State Representative Deb Sanderson, she knew exactly what it meant upon hearing it in that video, and so Michaud owes an apology to Sen. Collins for appearing in content that I produced independent of his campaign’s oversight. By the logic of Sanderson, who is apparently much hipper to salacious slang than I am—and Gagnon and Savage for that matter—her aforementioned bedfellows must have known what it meant when they initially stumbled upon it, and they also have some apologizing to do.

Or maybe they honestly didn’t know, and that’s ultimately the issue with logic in the case of the Maine GOP—it has no root or center—it only applies when they evoke it for their own gain. The Bangor Daily News ran a poll to find out who knew what “brain” meant before I inadvertently brained the door wide open on its definition and around 80% or so respondents reported being previously unaware before someone started virtually stuffing the polls. Upon William Davis mentioning this in passing online—that someone at one IP address had been responsible for going through the hassle of opening nearly 100 new windows in order to vote yes as many times—a fellow blogger publicly wondered if the Maine GOP was responsible. Savage—again, the Executive Director of the party—suggested that the question was accusatory, and if it was not intended to be, the blogger should have directed the question the party. This is interesting, of course. By that logic, Maine GOP spokesperson David Sorensen should have been in touch with me before issuing a laughably inaccurate release about my actions, and before ultimately putting Rick Bennett, the Chairman of the party, in a position to have to admit Sorensen’s actions were inappropriate.

But while the behavior appears “off-the-rails” and their logic convoluted and self-serving, I disagree with those who suggest these efforts are ineffective. Despite issuing a press release earlier this month that complained that the race is not as issue-focused as the GOP would like for it to be, Sorensen and company are wizards when it comes to running interference on issues-based dialogue. The past 36 hours have been an effective exercise in evading any discussion of the LePage legacy, or issues facing Mainers.

LePage’s base is solid and unmoving, and the party benefits from casting doubt on Michaud as a means of further splitting the vote between him and distant third Eliot Cutler. Their candidate’s cache of gaffes, some including known sexual allusions, have been overlooked temporarily. I jokingly mentioned that LePage and I now share something in common by way of a hip hop related gaffe as “No Vaseline” is an Ice Cube track from the early 90s and the shorthand employed by the governor when he alluded to Democratic Sen. Troy Jackson having sex “the people” — or possibly raping them — devoid of the petroleum-based lubricant. Pro-LePage attack dogs reminded that bringing up past gaffes is tacky and evasive. That, however, is how the Maine GOP has shown its logic to work, at least in the hands of Sorensen and Savage. It has no center, no core, no moral compass. Their approach relies on a hybrid of the worst parts of Orwellian Newsspeak and Machiavellian antics deployed with zeal by unrestrained ideologues. When it comes to winning at all costs—honest or not, honorable or not, respectable or not—the Maine Republican Party has become a successful machine. This reality is as devastating and heartbreaking as it is true. I implore the party to find the desire to pursue success with respect and grace and save its soul while it still can.